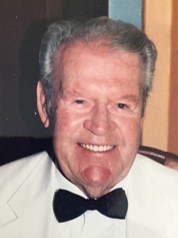 George H. Beaulieu Jr, 88, formerly of Salem, passed away at Vitas Healthcare Hospice in Deerfield Beach FL on February 20, 2018. He was born on September 4, 1929 to George and Irene (Tetreault) Beaulieu. George graduated from Salem’s St. Joseph’s High School in 1948. He was a sales clerk in Salem’s Empire Clothing store before and after serving in the U.S. Army from 1948 to 1950 as a Corporal performing military administration duties.

George married the late Anita (Theriault) Shalit on November 12, 1951 and they had two children, Daniel and Denise. He had a long career selling life insurance for John Hancock from which he retired.

George truly enjoyed spending time with family having many gatherings during his married years to Anita in Salem. He loved to play the piano at theses gatherings. He especially loved having family over to his cottage on Governor’s Lake in Raymond NH going boating and having his children water ski. In later years, he enjoyed Sunday evenings of karaoke with his partner Giacomo Castagna.

George is survived by his partner Giacomo Castagna of 21 years, his son Daniel Beaulieu & wife Helen (Ferrier) residing in Lynn MA, their children Shawn & Maria and his daughter Denise Godfrey & granddaughter Krystal Godfrey, both of Petaluma CA, sister-in-law Irene Beaulieu of Acton MA and many nieces and nephews.

He was preceded in death by his brothers Jean, Leo, Robert and sisters Gertrude (White), Lorraine (Perry), Theresa (Haight).

Memorial service will be held at a future date.

Social membership to the club remains on hold/closed until further notice.

The POPYC lounge and function hall remain closed until further notice due to Covid restrictions.

The POPYC community is saddened by the loss of long-time member and friend Steve Simmons. A meal train has been set up to aid the family in this difficult time. To help, go to: mealtrain.com/trains/qm8mq1

The 2021 Slip Pick for Full Boating members will be Friday, Feb 12 at 7pm. Covid protocols will be in place. Please see club emails for details.

Join us in congratulating our POPYC officers and trustees for 2021, including new Commodore Vin Piccinni.